Robert Shonfelt has been into health and fitness since he was a teenager and it is something that he now considers a way of life. While working for X3 Sports, Robert continues to train to reach his own personal goals as well as sharing his love for health and fitness with members.

Before Robert came to X3 Sports, he was working for Georgia Parkour Academy that he and his friends opened and ran in the Atlanta area. This gym focused on free running and movement training and also had a cheerleading program. But even before the start-up of this gym, Robert was training and fighting in MMA.

“Before Georgia Parkour Academy I was training to fight in Mixed Martial Arts at my gym on the south side, training under Cam McHargue who is in the Georgia MMA Hall of Fame. My first MMA fight was actually against a guy from X3 Sports. I lost but before I even got to the locker room, I couldn’t wait to fight again.”

While finishing up his degree in Computer Science and Video Game Design, he saw that he lived a mile away from X3 Sports and wanted to see if there was a way for him to teach some classes, make some money, and train for his fights.

Currently, Robert is the Training and Program lead at our West Midtown location. He is assisting in teaching some classes and personal training sessions but is mainly working in making sure everyone in the front end is educated when it comes to members and classes. Though working alongside the General Manager at West Midtown, working with people and teaching is one of Robert’s favorite things to do.

“I like working with people one on one. Every person I get to work with is a new challenge as far as what are their goals, what motivates them, and what are the obstacles they need to overcome. When they accomplish something I feel like I’ve accomplished something too.“

There are a lot of perks when you work at a gym and are able to coach and train people on a daily basis, but a common factor that trainers feel after they work with people is the feeling of accomplishment.

“Having someone tell me they can’t or have never been able to do something and then having them accomplish it, that’s rewarding! I lost my first MMA fight and even though the outcome wasn’t what I hoped for, the experience was so thrilling that I knew I wanted to do it again. Seeing my own shift in the pursuit of things and then being able to turn around and help people accomplish things they aren’t able to do is rewarding in itself.”

“Consistency over intensity. You’re on your own journey, you don’t need to compare yourself to anyone else. As a competitor, I’ve lost way more than I won but when I have won, it’s been awesome! There’s a lot of ways to measure a win and a loss, even in the gym. Come in, move around, and have fun! Devote to the time that you have and enjoy the process.”

5 Reasons Why Fast Track℠ Can Help You Get In Shape

Why You Should Add Boxing To Your Workout Regimen

7 Benefits Cardio Kickboxing Has On Your Health 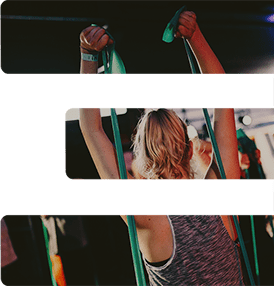