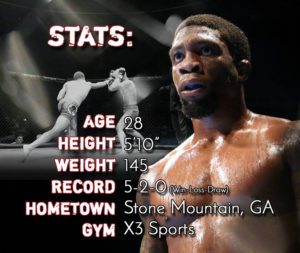 If you’ve seen him fight in the ring, you’ve seen the burning passion in Nathan “Nasty Nate” Williams. Nate is a local mixed martial arts (MMA) fighter from Stone Mountain, Georgia, who started wrestling in high school. Loving the challenges of MMA, Nate sees himself going against other intelligent and strategic fighters such as Connor McGregor, currently ranked the #1 in the UFC Featherweight division, someday.

Nate is about see one of his dreams turn into a reality. This weekend, “Nasty Nate” will take the stage for the first time as a Pro Fighter.

With a background in sports, Nate is a natural in the ring and trains at the X3 Sports West Midtown location. Learn how he got his nickname “Nasty Nate” and why he will be the next big MMA fighter! 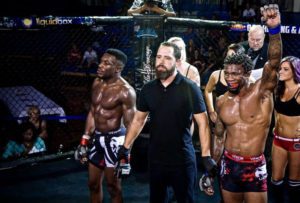 Congratulations, Nate! What does going Pro in MMA mean to you?

“Turning pro is a dream come true! It is really a stepping stone into a longer journey ahead. A lot of people do not make it to the pro ranks, so I thank God for letting me get this far.”

Your MMA nickname is “Nasty Nate”. Where did that come from?

“My nickname came from my second amateur fight. I was fighting for Conflict MMA and the announcer came to the back to ask me if I had a nickname. I said no, but my boy Demarques Jackson told the announcer that it was “nasty”. And ever since then, it just stuck with me.” 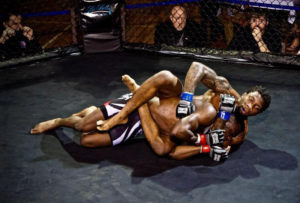 How long have you been training as an MMA fighter?

“I have been training in MMA for three years now. My first class was Brazilian Jiu Jitsu, at the X3 Sports Inman Park location with Helio Soneca.”

What about MMA do you love? How does it challenge you?

“I love that MMA has a wrestling aspect to it, as well as all the other aspects it contains. Being a 13-year wrestler, I wanted to be able to use my strong suits, as compared to boxing, which I felt I would be selling myself short.”

What are your favorite moves in the Octagon?

“As a wrestler, my favorite moves are takedowns and chokes. I tend to take people’s backs pretty easily, so essentially choking them comes next.”

Nate shouting out to “X3” with his coaches behind him.

What is your walk out song and why?

“My fight songs vary. Right now it’s “Ambition” by Meek Mills and Wale because I feel fighting is my ambition, and I wouldn’t want to be anywhere else.”

How did you discover X3 Sports? And what has X3 done for you?

“I discovered X3 Sports just off of an internet browser searching for “mma gyms”, and it was one of the first results that came up and was relatively close to my house. I went for a free class and signed up the same day!”

“X3 has changed my life completely! Besides giving me two cauliflower ears, LOL, it has made me become the martial artist I am today! I’ve earned a purple belt in Brazilian Jiu Jitsu as well as red belt in Muay Thai! I’ve also won several Jiu Jitsu competitions, as well as amateur fights and it would not be possible without X3 Sports.” 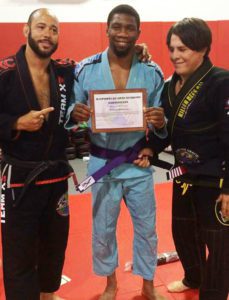 What is your daily routine at X3?

“My daily routine at X3 begins with an hour of Muay Thai, then an hour of Brazilian Jiu Jitsu, followed by an hour of fight team training.”

What are 3 words you would use to describe X3 Sports for other fighters who ask you about where you train?

I read that your MMA idols are Connor McGregor and Jon Jones. Why these two?

“Connor McGregor is my temporary idol because he has a dynamic striking style and has taken the MMA world by storm. He will be a future opponent soon enough, so that’s why he is temporary. But in my opinion, Jon Jones is the best fighter of all time. I try to emulate his style as much as possible. Plus, we are only three days apart in age.” 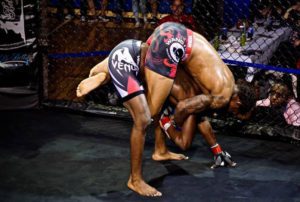 Nate doing one of his favorite moves on his opponent’s back!

You won your last two fights at NFC 75 and 76 and have a big fight coming up at NFC 80 against Jason Everhart – how are you preparing and what is your strategy against him?

“I don’t really focus on my opponent as long as I am on my game. My game plan is to come into the cage, take control, win the battle on my feet, then take him down and submit him.”

You started fighting at Featherweight 145, and moved into Lightweight 155 – what is your reasoning behind that?

“Lightweight is a very easy weight class for me to make! I’m a little on the smaller side in the lightweight division, but my grappling and movement are strong enough to compete. 145 is the weight class that I used to fight in because I am considered a large featherweight and I can impose my will in that weight class.”

We know you are cutting weight right now, but after making weight and winning Saturday, what is a big meal you’d love to eat?

“A big meal I would love to eat is Chinese! I am a Chinese food fanatic, so anything Chinese I am satisfied with!”

I see you hanging out with a lot of the other MMA fighters who train at X3 Sports, how important is that support system and training together?

“Us training together is the key to all our success! We are able to help push and motivate each other. We also help each other cut weight. Even when we aren’t fighting, we are still there each other in the saunas and definitely at the fights. It’s a brotherhood we have now, and I wouldn’t change my team for the world!” 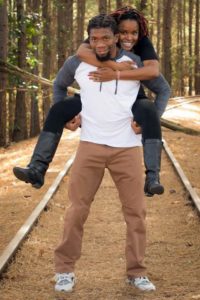 Congratulations! Nate with his fiancé Kendra

Congratulations on your engagement! What does your fiancé think of MMA? Have you taught her any moves?

“Thank you very much! Yes, my fiancé is actually a blue belt in Brazilian Jiu Jitsu herself. We help each other out on moves, but me more so then her.”

The holidays are coming up, what will you be doing?

“I will be training! I’m trying to be in a major fight organization by the end of 2016, so that means I will be grinding my butt off in the gym!” 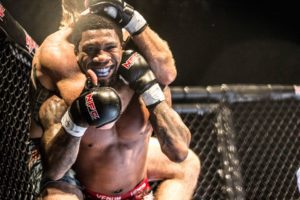 Nathan taking a few seconds to smile before winning the match!

Lastly, tell us and your fans out there, something cool about you that we don’t know!

“Something cool about me is that I am a very outgoing and sociable person. I am probably the nicest laid-back person one can meet. I love to smile! Back in high schoo, I had braces and glasses, so my smile has already been paid for.”

After speaking with “Nasty Nate”, I’m even a bigger fan of his. His persona really shines. I’m almost inclined to call him “Nice Nate”… 🙂 Remember to say “hello” when you see him training at West Midtown!

ADDENDUM: “Nasty Nate” wins his first Pro MMA fight with a triangle choke in Round One at 1:31. 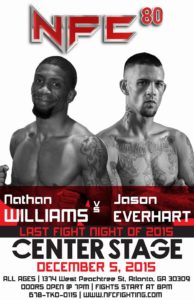 Power of Yoga: Prevention and Cure

Boxing for 30 Days: What Results to Expect

Is Kickboxing a Martial Art?

The Benefits of Hiring A Personal Trainer

A Sustainable New You: 5 Tips for Setting Health Resolutions and Sticking to ‘Em